Richard 'Dickie' Morgan was a long time friend of the Kray twins, and an early founding member of The Firm when it was first established in the late 1950s.

Morgan went on the run from the Army during the war, with the twins and the trio began their criminal endeavours when they began to frequent The Regal.

Dickie Morgan was a thief originating from the Mile End area. He lived with his mother Janet and his brothers at 32 Clinton Road in Mile End, close to Mile End Underground Station. One of five sons of an Australian sailor father and part-German mother, he had begun his criminal career at the age of eight by stealing from the orthodox Jews of Whitechapel who paid him a halfpenny a time to light the gas for them during the Sabbath. He had served time at Portland Borstal in order to do his National Service and been in and out of approved schools and had a triangular dent just below his hairline where he had a smashed his skull falling into a chalk quarry escaping from Ardale Approved School. He had been sent to approved schools and borstal training around eight times for various offences such as robbery, larceny and theft.

His overweight brother John Chunky Morgan, served time in Parkhurst prison and had held a riot at one time, and their father was imprisoned for his part in a warehouse raid. The twins often stayed at Clinton Road when on the run from the army for their National Service. He was portrayed by actor Phil Dunster in The Rise of the Krays film, 2015.

The Kray twins (left and right) with Dickie Morgan (centre right) and another associate in Bethnal Green. 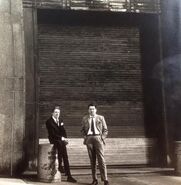 Dickie Morgan and Ronnie Kray in New York with World Featherweight champion Willie Pep who had connections to the mob in NY. 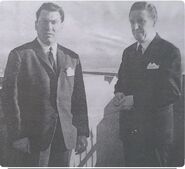 Dickie Morgan and Ronnie Kray in New York.
Add a photo to this gallery
Retrieved from "https://thekraytwins.fandom.com/wiki/Dickie_Morgan?oldid=5474"
Community content is available under CC-BY-SA unless otherwise noted.