E. Pellicci or also known as just Pellicci's, is a Victorian café in Bethnal Green Road. Established in 1900, it remains just as popular today with local residents and tourists.

Known to have been frequented by The Krays almost every morning, it formed a large part of their childhood and adult life, being only a short distance from their home 178 Vallance Road.

In 1900 Priamo Pellicci started to work for a little café in east London. When the owner of the cafe decided to leave, Mr. Pellicci, a man from Tuscany, Italy, bought it from him and with help from his wife, Elide, the couple managed to run the business successfully whilst also bringing up seven children.

After Mr. Pellicci’s death in 1931, Mrs. Elide Pellicci continued to run the café and her initials were used for the name of the cafe, E. Pellicci, and is still emblazoned in chrome along with her portrait inside the cafe. Mr. Nevio Snr., who was born upstairs, ran the business after Mrs. Elide Pellicci until he passed away in 2008. Mr. Nevio’s wife, Maria, is the successor and head of the family business today, and she has been cooking the breakfasts since 1966. Nevio and Anna Pellicci currently own the café, with the family having owned the business for more than a century, having moved from Tuscany, Italy. The cafe has been awarded a Grade II listed status by English Heritage.

The summer of 1950, when the twins were seventeen, is when they had their first run in with the law. The twins were standing outside E. Pellici, on Bethnal Green Road with a few friends on a Saturday afternoon when after loitering for a while, a young police officer pushed Ronnie Kray aggressively who said "Come on now, move along. You're obstucting this pavement." Ronnie then proceeded to punch the policeman in the mouth and the gang all ran off as the policeman lay on the ground. Soon after a squad car pulled alongside them and threw Ronnie in the back of their car and arrested him. Whilst Ron was taken back to the police station, a few hours later Reggie walked along Bethnal Green Road, found the young policeman who started the altercation, tapped him on the shoulder and punched him again. The twins soon appeared in the magistrate's court where they pleaded provocation, and Reggie said he only acted in Ronnie's defence. Father Hetherington spoke on their behalf and the pair received probation.

The Krays would have breakfast most mornings at this 'greasy spoon', usually after a night out at one their clubs and would sit in the back part of the cafe, facing the door. In a later book, Reggie would reminisce about the cafe:

"A memory popped into my head of sitting in Pellici's Cafe on the Bethnal Green Road savouring a coffee and talking to good friends. Does the cafe, which has been there since the turn of the century, still open its doors every day? Does pencil-moustached Nevis Pellici still bustle around shouting orders trough to his wife Maria, or Mama as she was known? That place served the best food outside of your own mothers kitchen and it still makes my mouth water at the thought."
―Reggie Kray, East End Stories, 2000

Reggie Kray would later describe in his biography how after years of being in prison, he would do anything for one last meal in E. Pellici, describing it as the tastiest food you could get at the time in London.

Interior of the café, with the two men seated on the right being the exact place the twins would sit every morning in the 1960s (with the unchanged wood paneling)

View of the counter from the rear of the café. 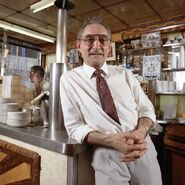 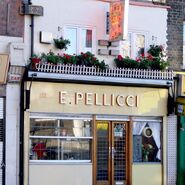 Tom Hardy playing both twins in, the film Legend (2015), inside E. Pellici. Notice the original wooden panelling which was added in the 1930s.
Add a photo to this gallery
Retrieved from "https://thekraytwins.fandom.com/wiki/E._Pellicci?oldid=5090"
Community content is available under CC-BY-SA unless otherwise noted.