Frances was born in 1943 in Hoxton, London to Elsie Shea, a Shoreditch born twenty-one-year-old seamstress and Frank Shea Sr., a woodworker (aged twenty-six at the time) from Hoxton but of Irish descent. She was born at 57 Ormsby Street and was baptised on the 17th October 1943, by Father Henry Wincott. Frank Shea, her brother was born a month after World War II was declared and worked as an occasional driver for the Krays durin the early 1960s. Frances first met Reggie Kray when she was sixteen through her brother but the pair did not become close until the 1960s.

A lavish reception followed at a Finsbury Park hotel where a snap of a petite Frances squished between the towering Reggie and Ronnie became one of the most iconic photos of the age.For their honeymoon, the couple stayed in an Athens hotel. Reg went out drinking most night, often leaving his bride alone in their hotel. A series of diary entries in Frances's own handwriting chronicle some detail of their troubled marriage. Three months after the marriage, Frances left Reggie and returned to live with her parents.

Reggie suggested a second honeymoon at the end of June in Ibiza. She agreed and on 5 June, Frances went for an appointment at Hackney Hospital and seemed in higher spirits. The following day, she saw Reg and they booked the tickets at a local travel agent. They farewelled each other and her brother's flat and Reg went home. 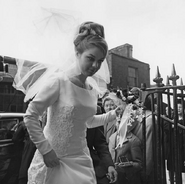 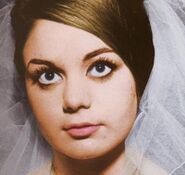 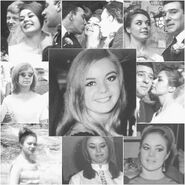 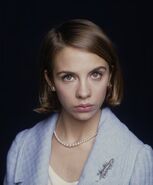 Retrieved from "https://thekraytwins.fandom.com/wiki/Frances_Shea?oldid=5490"
Community content is available under CC-BY-SA unless otherwise noted.