Originating from Hoxton, he occasionally drove the Kray twins around, and other members of The Firm in the early 1960s after selling them a car from a local garage. He found his sister after committing suicide in his flat, in 1967.

Both born to Elsie Shea, a Shoreditch born twenty-one year old skilled seamstress, and Frank Shea Sr., a woodworker aged twenty-six from Hoxton but of Irish descent, Frances or 'Franie' as she was commonly known, was just 16 when she opened the door to Reggie Kray, who was nearly 10 years older and had come calling for her brother Frankie, at her parents' home in Bethnal Green in 1960. The Shea's lived at 57 Ormsby Street in Hoxton, a long street of humble terraced cottages sandwiched between the Hackney and Kingsland Roads.

He was around eighteen years old when he first met the twins, and was living at 57 Ormsby Street in Shoreditch, with Frances Shea, his sister. It's alleged that Reggie was somewhat obsessed with Frank, often wanting him to drive for him as Frank had a reputation of being a 'wheelsman' and Frank often made excuses to distance himself from the firm to a certain degree.

It has been said that Frankie Shea had got to know the twins as a visitor to the Regal when he was seventeen. Frankie was involved himself in a number of villainous enterprises, and his partner in crime in much of this was Chris Lambrianou, the older brother of Frankie’s old school friend Tony Lambrianou. Reggie and Franie fell in love and married at St James's Church in Bethnal Green in 1965, but tragically two years later at the age of just 23, Franie, who suffered from mental illness, arguably brought on by the toxic relationship and entanglement she found herself in with her marriage to the Krays. Frances committed suicide by taking an overdose of pills at Frank's flat.

Freddie Foreman states in his 2015 book, The Real Last Gangster, that Frank became an alcoholic after the Krays were convicted, and he committed suicide in the late 2000s. Which is completely factually incorrect. Frank went on to marry Barbara from Islington, moving to leafy Muswell Hill in 1970 living a middle-class lifestyle bringing up their two children. Frank had car dealerships in both Islington and Chalk Farm.

Frank died in August 2011 from complications of terminal throat cancer. Frank was a non-smoker and teetotal for well over a decade.

He was portrayed by Colin Morgan in the 2015 film Legend. 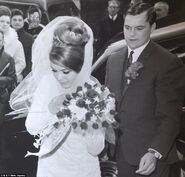 Frank escorting his sister out of the car, on her wedding day in 1965. 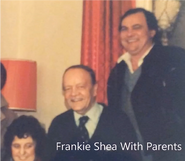 An older Frank Shea in the 1970s, with his parents. 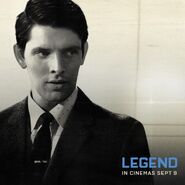 Colin Morgan was cast to portray Frank Shea, the brother to the female protagonist Frances Shea, portrayed by Emily Browning in Legend, 2015. 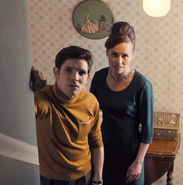 Frank Shea and his mother Elsie Shea, portrayed by Colin Morgan and Tara Fitzgerald in Legend, 2015.
Add a photo to this gallery
Retrieved from "https://thekraytwins.fandom.com/wiki/Frank_Shea?oldid=5790"
Community content is available under CC-BY-SA unless otherwise noted.