The Kray Twins Wiki
Register
Don't have an account?
Sign In
Advertisement
in: People, The Richardsons, Gangsters, Criminals 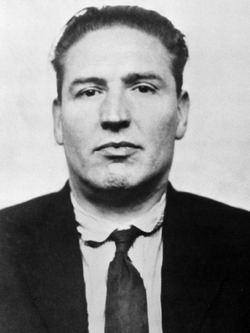 At the age of five he moved with his family to a flat on Walworth Road, Elephant and Castle. Although his parents were not criminals, Fraser turned to crime aged 10 with his sister Eva, whom he was close to. He attended St. Patricks Roman Catholic School in Waterloo. Fraser was a deserter during World War II, on several occasions escaping from his barracks. It was during the war that he first became involved in serious crime, with the blackout and rationing, combined with the lack of professional policemen due to conscription, providing ample opportunities for criminal activities such as stealing from houses while the occupants were in air-raid shelters during the Blitz.

In 1941, aged seventeen he was sent to Borstal for breaking into a Waterloo hosiery store, then given a 15-month prison sentence at HM Prison Wandsworth for shop-breaking. Such were the criminal opportunities during the war, Fraser later joked in a television interview many years later that he had never forgiven the Germans for surrendering. In 1942 while serving a prison sentence in HM Prison Chelmsford he came to the attention of the British Army. Although he was conscripted he later boasted that he had never once worn the uniform, preferring to ignore call-up papers, desert and resume his criminal activities.

Fraser's 42 years served in over 20 different prisons in the UK were often coloured by violence. He was involved in riots and frequently fought with prison officers and fellow inmates. He also attacked various governors. He was one of the ringleaders of the major Parkhurst Prison riot in 1969, spending the following six weeks in the prison hospital owing to his injuries. Involvement in such activities often led to his sentences being extended. Whilst in Strangeways, Manchester, in 1980 Fraser was 'excused boots' as he claimed he had problems with his feet because another prisoner had dropped a bucket of boiling water on them after Fraser had hit him; he was allowed to wear slippers.

A constant troublemaker in prison, attacking governors and warders over perceived injustices which inevitably resulted in floggings, bread and water and the loss of remission, Fraser had by this time been certified insane on three occasions. The first came when he was in the army during the second world war, the second time when he was sent to Cane Hill psychiatric hospital in Coulsdon, Surrey, and the third when he was transferred from Durham prison to Broadmoor.