Deceased
Edward Richard Smith or more commonly known by many as "Mad Teddy Smith", was a member of The Firm and a psychopathic homosexual rumoured to have had affairs with Ronnie Kray and Tom Driberg, a Labour MP.

Smith was very close to the Kray twins and was part of their senior management team that met every day at 178 Vallance Road. He allegedly disappeared the day after an argument with the Krays in 1967, but in 2012 several photographs were published online claiming to be Smith as an elderly man in Australia.

Smith was born on 4th January 1932 in Islington. By the age of seventeen, Smith had nine criminal convictions, ranging from armed robbery, assaulting a police officer, and theft. When befriending the twins, he had only recently been released from prison after being sent down for fifteen months, for theft of a car. Smith grew up in Bethnal Green.

Smith was alleged to have been extremely violent and unpredictable when he had been drinking alcohol and had many homosexual affairs throughout the 1960s. Known by many as "Mad" Teddy Smith, he was said to have been an intelligent man who could speak many languages.

He had been put inside Broadmoor Hospital at some point and had been certified insane. He carried around a little dog and a long cigarette holder and was also a playwright, and wrote a prison-based play for the BBC called The Top Bunk, in October 1967. Teddy was credited as 'Ted Smith' in the credits. He was involved with springing Frank Mitchell from Dartmoor, along with fellow firm member Albert Donoghue. He also helped write letters to national newspapers regarding Mitchell's release date.

In Micky Fawcett’s Krayzy Days, there is an instance described where Teddy was seen at The Hideaway, being a nuisance and too drunk. He was thrown out of the club, and later arrested with the Twins in association with the McCowan affair, but the trio were all acquitted in April 1965.

Smith was in a relationship with Ronnie during the 1960s but it is not known for how long. He and Ronnie fought quite frequently, verbally, never physically and their rows never lasted long. Ronnie was very fond of Teddy and vice-versa. According to Pearson, he was ‘one of the few people Ronnie trusted who was also capable of handling him’.

He also had a relationship with Tom Driberg, a Labour MP, who provided him with the addresses of rich friends to burgle in exchange for sexual favours from Smith. Smith and the Kray were arrested by Nipper Read's police squad on protection racket charges after Smith had smashed up a West End club the twins were trying to muscle in on. Lord Boothby campaigned for his friends in the House of Lords, demanding to know how long they would be detained before the trial. His fellow peers were appalled at Boothby's intervention, as were the police.

The twins and Smith were later acquitted, seen in the photo above leaving the Old Bailey. As they walked free from the court, Boothby had penned a letter of congratulations to Ronnie and Teddy Smith.

He disappeared in the late 1960s, just prior to the arrest of the twins. Some say (including Nipper Read) he was murdered at the request/at the hands of the twins, after having a disagreement. The disagreement was that he and Ronnie fought fiercely over a boy whilst on holiday with some other young men, and that Smith was strangled by Ronnie in a lovers' quarrel in 1967 before being buried in marshland in Essex. In addition to this, Reggie revealed in the 2001 documentary, Reggie Kray: The Final Word, that there was one other murder the twins did that had not ever been revealed, with many believing this was Teddy Smith.

However, it has been said that Smith was not killed at all. In Bringing Down the Krays by Bobby Teale, it states that Henry Buller Ward claims he ran into Smith in London, a few years after his supposed murder. More recently, it was alleged that he packed up his belongings and moved to Australia, where he lived out his life, dying of cancer in 2006 after he briefly returned to the UK. In 2012, two images began to circulate the internet and gangland activity forums of an alleged Smith in his later years, bearing an uncanny likeness to him. Also, a photo of his 1980 passport was posted, showing his full name and date of birth and being registered in Sydney, Australia.

An article in 2019 suggested that Smith was in fact, an MI5 mole as suggested by the Teale brothers, and this was found in an unopened file held by MI5, in which a member of the Firm was actually a secret agent, sent out to find out information about Lord Boothby.

In the 2015 film, Legend, Smith was portrayed by Taron Egerton. 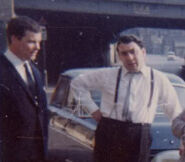 An alleged photo of an old Teddy Smith. 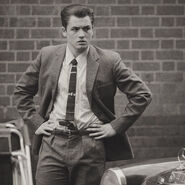