Location of the murder of George Cornell by Ronnie Kray on 9th March 1966.

"One pub Ron never did like was the Blind Beggar in Whitechapel Road, Stepney - the pub where he would later shoot dead George Cornell. It’s been renovated since then, of course, but in the old days, Ron hated the sight of the Beggars, and called it a dump. He says today that he must have had a premonition about it."
―Reggie Kray, Born Fighter 1991

The Blind Beggar is a pub on Whitechapel Road in Whitechapel, East London, England. It is notable as the former brewery tap of the Manns Albion brewery, where the first modern Brown Ale was brewed. The pub was built in 1894 on the site of an inn which had been established before 1654 and takes its name from the legend of Henry de Montfort.

The pub is known for Ronnie Kray's murder of George Cornell in front of witnesses and as the location of William Booth's first sermon, which led to the creation of The Salvation Army.

The pub was built in 1894 on the site of an inn which had been established before 1654 and named after the legend of Henry de Montfort, a son of Simon de Montfort. In 1808, it was the enterprising landlord of The Blind Beggar who bought the small brewery next door and named it the Albion Brewery, which grew to be the third-largest in Britain by 1880 and, at the beginning of the twentieth century, the first Brown Ale was brewed here by Thomas Wells Thorpe.

In 1865, William Booth preached his first open-air sermon outside the Blind Beggar, which led to the establishment of the East London Christian Mission, later to become the Salvation Army. William Booth is commemorated by a nearby statue. The pub is also a popular starting point for the Monopoly Pub Crawl, despite being located on the board's third space. The pub was frequented by Harry Redknapp and was owned by Bobby Moore at one stage.

In 1904, ‘Bulldog’ Wallace, a member of The Blind Beggar Gang of pickpockets who frequented the pub, stabbed another man in the eye with an umbrella – initiating the notoriety that coloured the reputation of the pub in the twentieth century.

In the Blind Beggar legend, de Montfort was wounded and lost his sight in the Battle of Evesham in 1265 and nursed to health by a baroness, and together they had a child named Besse. He became the "Blind Beggar of Bethnal Green" and used to beg at the crossroads. The story of how he went from landed gentry to poor beggar became popular in the Tudor era and was revived by Percy’s Reliques of Ancient English Poetry, published in 1765. The legend came to be adopted in the arms of the Metropolitan Borough of Bethnal Green in 1900.

The Blind Beggar is notorious for its connection to East End gangsters the Kray twins. On 9 March 1966, Ronnie Kray shot and murdered George Cornell, an associate of a rival gang, The Richardsons.

The Blind Beggar is notorious for its connection to East End gangsters the Kray twins. On 9 March 1966, Ronnie Kray shot and murdered George Cornell, an associate of a rival gang, The Richardsons. The murder took place in the then saloon bar. On 9 March 1966, Cornell and his friend Albie Woods entered the Blind Beggar pub, ordered some light ales and then sat upon stools next to the bar. At around 8:30pm, both men were approached by Ronnie Kray and a Kray associate, Ian Barrie; upon seeing him, Cornell smiled and said sardonically, "Well, just look who's here". As a warning to the barmaid and the few others in the pub, Barrie fired two shots into the ceiling, while Kray walked towards Cornell, took out a 9 mm Luger, and calmly shot him once in the forehead, just above his right eye.

The men turned and departed to a waiting car on the street. The record on the jukebox was the Walker Brothers - ‘The Sun Ain't Gonna Shine Anymore'. The needle on the jukebox got stuck from a ricocheting bullet fired by Barrie and it kept repeating the words ‘anymore ... anymore ...' Cornell slumped against a nearby pillar, the bullet, apparently, passing straight through him. He was taken to a nearby hospital, where he died at around 3:30am.

The news spread rapidly. Although Ronnie Kray was identified by several eyewitnesses as he calmly left the public house, no one would agree to testify against him and the police were forced to release him from custody. Cornell was buried in Camberwell New Cemetery, south London.

The freehold ownership of the pub was sold at Allsop auction on 17 May 2010, the buyers being a family of Indian descent who previously owned a casino in Whitechapel at the time of the Krays.

As of 2020, the pub is still trading, although the inside has been heavily renovated and is completely different to how it would have been in the 1960s, it displays various informative posters of the Cornell murder towards the rear of the bar. 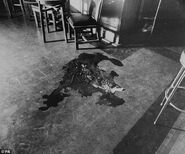 The crime scene after Cornell was shot, showing the blood stains on the floor where he had been seated. 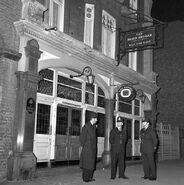